Decorative painting is one of the brightest pages in the history of Ukrainian culture. Names of the artists from a small village in Dnipropetrovska oblast who has mastered this technique are widely known beyond our country. Why? Let’s see.

Graphic motives which at first were used mostly as wall ornaments soon became commonly used to decorate household objects, musical instruments, souvenirs and toys. Nowadays they can also be seen on textile and typographic products. There’s magic in these precise lines, contrastive colours and openwork patterns, bewitching and putting a beholder into a state of deep esthetic pleasure. Perhaps, that is where lies the secret of their popularity.

Despite the fact that the birth of this technique is usually dated the beginning of the twentieth century, it began developing long before that. A well defined set of recognizable images used in Petrykivsky painting came into existence as a result of the transfer of Zaporozhsky kossacks traditions from one generation to the next. First items decorated with it, which now can be seen in museums, date XVIII century.

Petrikivsky paining is recognizable mostly thanks to the predominance of floral patterns in it. Yet it’s not what makes it special. Images abound in non existing plants that are combinations of the elements of local flora (for instance, atraphaxis replicata or allium). Existing plants, such as roses, asters, bluettes, dahlias, vine leaves and clusters of snowball tree berries appear to be somewhat surreal. Featherlike leaves reminding fern are also a common element. Patterns are traditionally inserted on black, white or golden groundwork. Abundance of bright colours and richness of images are associated with prosperity, well-being and lightheartedness. This is the source of these items’ appeal.

Another unique characteristic is a refusal to draft sketches. Artists insert the pattern right away without drafting the lines of a future image. Most commonly used tools are thin brushes and stems. Some elements are introduced using nothing but fingers. The process of painting is often compared with meditation as it requires maximum concentration and confidence, smoothness and precision in every movement.

Another distinctive feature of Petrykivsky painting is its symbolic nature: every colour and pattern has its own meaning, which gives every painted object special significance. For instance, snowball symbolizes prosperity, hollyhock – fame and nobility, irises – a new beginning, a dawn of new life. Therefore, if you buy Petrykivsky style painted gifts, they will be not only a home decoration, but also a sort of charm, your non verbal wishes expressed by the elements of the painting.

In 2013 this decorative technique originating from a small Ukrainian village was acknowledged a part of world’s intangible cultural heritage and was included in the corresponding list of UNESCO. This was a significant event for the whole Ukrainian nation giving us another reason to be proud of our history and culture.
Ukrainian gifts decorated with Petrykivsky painting

Nowadays decorative painting on wood has become the most popular. Various souvenirs made using this technique can be found in thousands of houses in Ukraine and all over the world. The most original and commonly used items are painted jewel-boxes and Christmas tree decorations. Once canonical black groundwork is now replaced with a multitude of bright colours, which allows every artist to keep to his/her unique style using favourite colours and ornaments. However, the very fact that every such item is hand-crafted by a master of Petrykivsky style painting is enough to make it unique.

Souvenirs presented by Ukrgifts are made of natural wood, painted with honey-based paints and then glazed with mat or sleek lacquer. They are fully hand-crafted and reflect all the richness and uniqueness of Ukrainian culture. Their value is beyond any doubt. 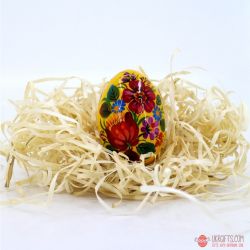 This year, unfortunately, there will be no Easter markets. But we still ship orders. Please be healthy!
All news
Newsletter